The village of Chitkul, below the Kinnaur Kailash mountain range, Himalayas. Over that snowy peak is Tibet.

For me, the first night’s sleep in Chitkul was terrible. I think it was from overtiredness, but I went to bed super early, had a crappy sleep then woke up at about 4.30 am and ended up sitting outside on the veranda with my trusty torch wondering what to do with myself. I really needed to go to the toilet, but, having heard Raj’s (guesthouse owner) tale about a snow leopard taking his large, male donkey away for a meal a few months ago – just down the hill a little bit – I was just too much of a fraidy cat to go along the veranda and around the corner to the concrete box that contained the necessary hole in the ground. It was very, very dark, we were way up in the mountains, nobody else was around, and although I like to think I don’t resemble a donkey in any way, what if there was a snow leopard that needed glasses crouching in the shadows, just waiting for me to be at my most vulnerable with my pants down? Okay, I could close the bathroom door and be safely inside with whatever creatures lurk inside such less-than-salubrious surroundings, but what if the short-sighted snow-leopard sat outside the door and trapped me there until I could yell for help in the morning? These, and other wonderful-to-read-in-a-book-about-it-happening-to-somebody-else visions swam round and round in my head until I finally gave up and went back to bed with my legs crossed. My partner, as per usual, was comfortably asleep, blissfully unaware of the incredible dangers I had just avoided, and I lay there in our concrete cell waiting for dawn to throw it’s disgustingly cheerful sunrays over the mountain tops again and bring with it the sanity of daylight.

My partner, once awake and in a disgustingly cheerful mood, thought this was the funniest thing he’d heard in ages. He really can be quite unchivalrous at times. For the rest of our stay in Chitkul I had to put up with little jibes about snow leopards, killer donkeys and other such witticisms from him. I confess to wishing that he would one day be trapped in a toilet with a giant flesh-eating snail or that a crow would follow him round the village for a day trying to bite his bum every minute or so.

After a crappy cup of coffee and an absolutely wonderful three or so cups of chai, I began to feel a little more human again. The view from our guesthouse was fantastic. We were sitting amonst the giants of the world – huge mountains with glaciers and snowy tops, and clouds constantly dancing around them. Every few minutes the clouds shifted and we had an entirely different view to look at. And to our left, a wonderful snow-capped peak called Kinnaur Kailash. Over that peak – Tibet, the border only 60 km away. Mindboggling. It was hard to believe we were really there.

We went for a walk around the village. An absolutely exquisite place, steeped in history and culture. The buildings were made of wood, or wood and stone, with pitched roofs covered with slate, or in some cases, corrugated iron (a much cheaper alternative). There were many little storehouses dotted all over the village with hay stored in the roof, grains, etc, stored in the second story of some and (I think) oils stored in the bottom. They all had huge, old metal locks on the tiny doors. We figured they must send the kids in to deal with the stores, because the doors were too small for adults to go through.

A storehouse with an old padlock on one of its small doors. Each family has a storehouse of their own. Chitkul.

A village elder walks up one of the village’s steep paths. Chitkul.

Chitkul houses constructed of wood and stone, with slate quarried locally on the roof of most of them.

Every second step we took, we stopped to take photos, gasp with wonder then take more photos. There were waterways everywhere with little bridges and the occasional water-driven grinding mill across them. The people all wear ‘topi’ – wool-felt hats with one side that is green. They’re very gentle, quietly friendly people here and we had some nice conversations. On our way down the path by the primary school, we sat and watched some school children going home. They were going past a women who was crouched down with them, giving them something. As we got up to carry on walking, she rushed up to me and gave me two pieces of flat bread with what looked like a cake of honey and seeds on it. She gestured that one was for me and one was for my partner. I was quite bowled over by this kindness to complete strangers. And the food was absolutely delicious. Bless her lovely heart.

A millhouse straddles one of the streams in Chitkul.

Beneath the millhouse. Chitkul. 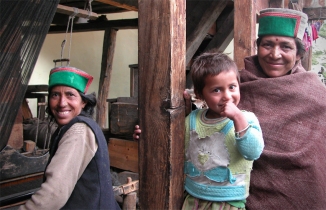 Local women with their ‘topi’s’ (hats), denoting that they are ‘Kinnauries’ – from the Kinnaur districts of Himachel Pradesh, Himalayas. Chitkul.