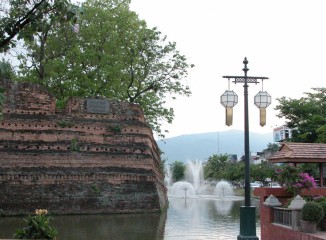 Beautiful Chiang Mai – Outside the wall.

Once again, enjoying lolling around on our verandah, we were discussing snakes and lizards as per usual. Chow told me a story about his cat at his home in the country, who was stalking and catching a bird. Meanwhile, a large snake that he had – a python, I believe – was creeping up behind the cat. The cat caught the bird, the snake caught the cat, the cat turned around to see what on earth was going on and let the bird go, while the snake was having a few problems trying to get this wriggly, furry bit of prey to fit down its throat. So while the snake and cat were tussling, three people were on the other end of the snake trying to pull it off the cat. They finally succeeded and the snake and cat both left looking completely puzzled at their foiled hunting attempts. I’d love to have been there to get a photo of that. Snake, cat and bird, all in a row. END_OF_DOCUMENT_TOKEN_TO_BE_REPLACED

King cobra. According to the Thai people, touch one of these and have good luck for life. Personally, I think it’s better luck not to go near one at all…

Saturday – It got up to 39 degrees yet again, so we had brunch at the usual cafe then slept through most of the day or lay around under wet sarongs right in front of the fan, wishing it was a ceiling fan. We don’t know how to stop it turning so we get cool for a few seconds then have to wait for it to come round again – by which time we’re sweltering already. At the cafe an old lady came along selling little jellyish cake things that looked like fish roe to me. Gill was brave enough to try one and it turned out that they were a kind of chicken jelly with satay inside. They were tasty enough but the texture was pretty weird so we turned down offers of more from the cafe owners, bless them. END_OF_DOCUMENT_TOKEN_TO_BE_REPLACED

The evening after our zoo day, we had a wee party on our verandah. I had decided that a bottle of gin was in order, so I went and bought one at the 7/11 (otherwise known as a Dairy in NZ) for 260 baht (or about $12.60 NZ). Chow, Gill myself and a Phillipine girl called Lyn swanned about with a guitar, some gin and whiskey and several buckets of ice. Very civilized. Chow and Lyn put a sand lizard on the ground by my foot, thinking to scare me, which didn’t work at all, to their great disappointment. Gill suggested quietly to me that I should go and get my scorpion and do the same back, which worked a treat. When Lyn spotted it, we both jumped back and climbed on our chairs in horror (this was at night time, so the light was working in our favour) and she was totally taken in, poor thing. I think she had murderous intentions towards us for a little while after that. Chow then passed me a fancy whiskey bottle that had a cobra inside it with a large scorpion in its mouth. He was lucky I didn’t drop it! He then told us that the cobra would have been put in the bottle when small, then the scorpion dropped in once the snake was bigger, then both of them drowned in whiskey. We couldn’t believe the cruelty of it! And in a Buddhist country? But for some people, dollars speak a darn sight louder than morals. I also really hate seeing the insects set in resin or in frames at the markets. They’re pretty impressively sized bugs, but I refuse to support such a practice. Every time I see this I shake my head at the person selling them. I have to say I’ve seen a lot less of this than I saw in Bangkok in 2005. Maybe more tourists are refusing to buy them. I hope so. END_OF_DOCUMENT_TOKEN_TO_BE_REPLACED