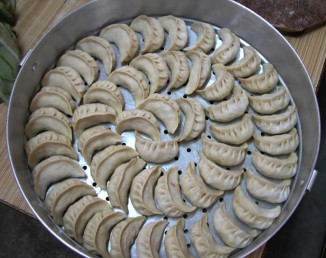 Paul and I ran around like blue-bottomed flies trying to find some vertical prayer flags in Rewalsar, which appear to be as scarce as hens teeth no matter where you are. So while I was in one shop organizing some to get made, he was down the road doing exactly the same thing! So we ended up with two sets. That’s okay though – we got to watch the guy actually printing the design onto Paul’s flags – a huge wooden printing block with a picture of Padmasambava and Tibetan writing on it. Interesting stuff. END_OF_DOCUMENT_TOKEN_TO_BE_REPLACED 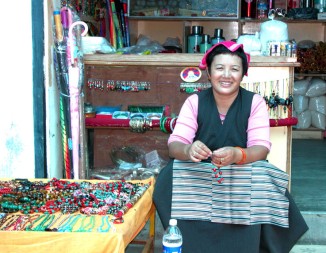 A local Tibetan woman in traditional apron poses for me. Rewalsar, India.

Today is our second to last day in Rewalsar and it’s going to be a wrench to leave here. It’s absolute heaven (even aside from the daily access to momo).

Last night we sat up in the secret place on the roof again, played Pink Floyd by candlelight, watched lightening AND looked at stars – pretty awesome combination – and had a gin or two. Little fireflies flitted about and so did the bats who were chasing them. We even had a dog up there with us. The canines round here seem to be part mountain goat. We actually ended up talking until dawn – due to the fact, I guess, that we have such a short bit of time left and wanted to savour every moment. Of course we weren’t aware that it was nearly dawn until we heard the puja and wondered why they were so early. Whoops – outside (we were back in our room by then) the light was dawning. They weren’t early, we were late! But somehow that doesn’t matter when you can sleep in till midday then go and order your breakfast. I could really get used to this life. END_OF_DOCUMENT_TOKEN_TO_BE_REPLACED

We got on a bus to go up to Mandi, which is the entrance way, so to speak, to the Kullu Valley – up in them thar hills. We were told to meet at the guesthouse next door to us at 4 p.m. for the bus. We waited (as you do here) then traipsed around corner after corner and across a busy road to wait some more. Three or four different buses arrived and there was great confusion as to which bus we should be on. Many people waiting, bus loading guys cruising around with i-pods in their ears with not a care in the world (of course not – it wasn’t there bus to miss!) and a guy collecting tickets who looked perpetually worried and didn’t ever give clear answers about whether we were on the correct bus or not. In the end we just got on what seemed like the right one and claimed seats then sat there melting for half an hour. An ice-cream seller, a boy selling cold water and some beggars were working this strip and doing a roaring trade. One of the beggars, a girl of about 10, had a badly burned face, another could do unbelievably bendy things with her body. Watching out the window, after we had all got on, they were seen counting large wads of money between them. They knew the secret to prosperity alright – location, location, location. They’d bought themselves an ice cream each, relishing them as only a kid can. Nice.

Sitting upright for 1twelve hours in a hot bus is not the most fun thing in the world to do, but finally at about 6.15 am we landed in Mandi. Some more confusion in the Mandi bus stand and we found a bus which apparently went to Rewalsar. Another hour of winding roads and finally we got to the end of our journey. The approach was just mindblowing. There’s a huge statue of Padmasambhava (sp?) or Guru Rimpoche looking over the town which surrounds a small lake. This statue is so big it’s just impossible not to be impressed. Apparently it’s taken five years so far to build and they haven’t finished the base yet. Guru Rimpoche is the guy that took Buddhism to Tibet and this town, Rewalsar, is where he started from.

We booked into a monastery here, which is beautifully painted and has a temple, small outside rooms with glass sides and ever-burning butter lamps, a really tall pole smothered with Tibetan prayer flags and, as a nice juxtaposition, lots of thug monkeys. The view from our room looks over the courtyard at the temple and flags and it’s the most watchable view I think I’ve ever had. Tibetan buildings etc are so beautifully coloured. They really have a lovely sense of style.

We wandered around the lake (clockwise, as is the tradition here) and bought some food for the tame fish in the lake. There are hundreds of these fish and they all flop around, half in and half out of the water. For a little more baksheesh (yes, money) the old ladies here will beat the monkeys off with their long sticks so you can feed the fish. Some cunning monkeys a few feet away have learnt to dive for these fish biscuits. I’ve never seen a swimming monkey before, so that was somewhat novel. A nearby cow has also caught onto this whole fish bicky business and took a real liking to Ernie (and his biscuits) – it was actually smooching up to him adoringly. Must have sensed that he’s a farmer I think.