After doing a stint in Janpath, to go to the Tibetan Row (shops), we organised storing our luggage in the luggage room down the road, had dinner on the roof and made our way to the Metro. This time the guards were even more interested in us as we had backpacks on. The “women’s things” trick didn’t work this time, so we had a bit of a performance unlocking padlocks so they could play spot the bomb. Naturally they didn’t find one, so on we went. We had to leave from Old Delhi Railway Station – a charmless place with rats as long as your forearms that will walk right up to you. I amused myself stomping at them while Paul went to buy water and check the platform-leaving situation. We were lucky enough to be near a pile of goodness-knows-what thingys done up in sacking bales, so I crouched down on one of them, feeling pretty pleased with myself for finding a seat. I decided to stand up again though once Paul told me that a rat had just run under my knees. I’m all for being sociable, but that’s just a little bit much for me. After all, we hadn’t even been introduced!

We actually found that we were in a cubicle on the train with foreigners. This was a first for me. Usually it’s with Indian families, etc. It felt almost strange. I actually slept unusually well on my slab, and things had been going along swimmingly, until I woke up to my alarm going off at 4.45am. Theoretically, we were supposed to get to Haridwar at about 5.15am. Well, 5.15 came and went and nobody seemed interested in waking up. We stopped at a station for ages and I had no idea where it was, as I couldn’t find any locals that spoke english. Paul just downright wouldn’t wake up, and sometime during the night a woman, a man and a baby had sprawled on the floor between the bunks, so I couldn’t even sit up and take photos of the scenery out the window, for fear of standing on the baby. So, here I was, cramped in my little lower bunk, not able to even sit up, not knowing where on earth we were, wondering if we should be leaping off about now, and I seemed to be the only one that gave a damn!

Around 6.15, we pull up at another station and everybody magically awakens and starts getting ready to get off. Paul was particularly chirpy, the rotten so-and-so, and was obviously puzzled about why I was so grumpy. That’s it – from now on, I’m going to just sleep and let him worry about what station.

So we got off and walked along the station, with me willing to bite the head off anyone that approached me. I had my sunglasses on so my glare wouldn’t scare anyone innocent. Then we walked past a guy who was sprawled on the footpath with insects swarming all over him and a puddle of urine nearby. We were pretty sure he was dead. That was a bit of a shock to the system. As Paul puts it, this is my first visit to an Indian holy place and the first thing I see is a dead man. However, apparently by Indian standards, this (Haridwar) is a good place to die. Bless the guy, at least his suffering is over.

Once out of the station, we made our way to a cafe, through honking buses and idiot touts who couldn’t take no for an answer. Once I’d had a bit to eat and a couple of chai’s, I started to come right a little. We jumped on a bus to Rishikesh and I quite enjoyed the ride up, as we had a good seat in the front and the scenery was quite interesting. This is where I got my first view of the Ganges River. They have a Shiva statue here that’s absolutely enormous! Boy, these guys are good at statues.

The signs here are great – “This is a highway, not a runway” (on the side of the road), the ‘Fair Look’ beauty clinic, the ‘Jolly Clinic’, the “Happy Faces’ school, etc.

From Rishikesh, we took a rickshaw to Luxman Jula and then walked down winding, narrow steps for ages until we came to the huge swing bridge across the Ganges that Luxman Jula is named for. We booked into a nice old building that runs a guesthouse and they gave us a room 3 times the size of the cell they give us in Delhi. The only drawback was the fan was too far away from the beds, so didn’t really have any effect. A rearrangement of furniture soon sorted that out though.

We had lunch overlooking the Ganga. We could see the bridge from there and the monkeys hassling the people from the cables above. Laxman Jula is quite a beautiful place with huge, impressive temples in nicely painted colours. Our guesthouse is next to one, which is several stories high. People walk up each story and ring the big bells there as they get to each level. So we have bells ringing all day. It’s a darn sight nicer than the honking, etc in Delhi though, so we not complain.

In the evening, we had dinner at another cafe overlooking the river from the other side, and this place had monkeys doing their get-silly-at-dusk thing and jumping on the roof then off the side of the buildings into the trees below. Cheap food and entertainment with it – wonderful!

After dinner we wandered up the hill to town and Paul decided to get a shave and trim in a little shack on the side of the road. They gave him a trim and just as they were about to shave him, the power went off. So they lit candles and carried on. Paul is a very brave man. Like heck would I let someone at my throat with a cutthroat razor in the candlelight! Ten points for intestinal fortitude, I say.

Meanwhile, I sat outside watching several little frogs hopping here and there. They are just so cute. It’s not often you get to see frogs these days and it seemed like I had happened across a frog highway. Even a little firefly got stuck in my hair. What a magic place.

I got up this morning and went to the toilet on the corner of the building. When I came back out, opening the flimsy wooden door that only just locks, there was a monkey on the roof about three feet away from me. That woke me up! Turned out, the place was surrounded by monkeys – Rhesus vs Langhurs, fighting over the mango tree out the front. What a racket! The rhesus ones are happy to land as heavily as possible on the roofs and threaten and scream and carry on. Again, I watched with camera, although I kept under the roofs and had my umbrella with me as an anti-monkey device. 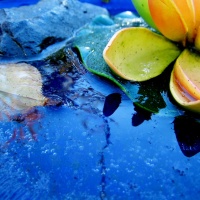 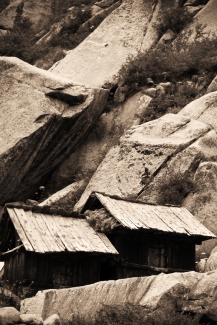 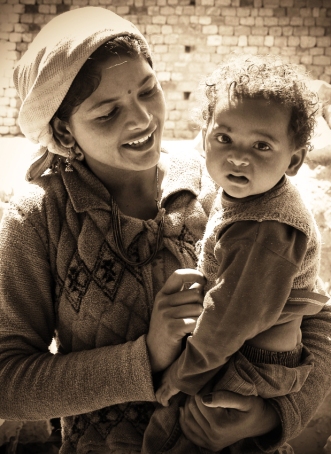 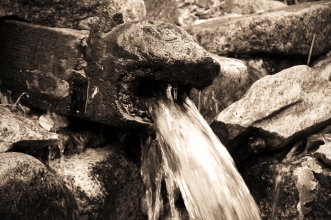